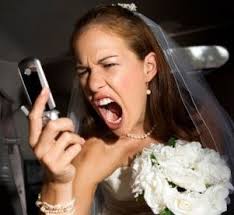 Just recently we experienced something that was very unpleasant.  I am not going to name anyone in this, however I have had the permission of the bride involved to share her story in it’s entirety.

I was at a wedding for a wonderful couple that secured us to provide our entertainment for their special day.  The venue I was at on this night had absolute ZERO phone reception.  This didn’t bother me as I knew that I and my other team members on that night had everything for their events as well.  I completely enjoyed the night, watching the bride and groom have the night of their lives and the guests too.

The night came to an end at 11.00pm.  By close to 1am in the morning I was on the road and heading for home when my phone came back into reception area.

There were 23 missed calls and 7 voice messages!

Immediately my heart went to my throat and my stomach was sick.  This many calls from the same number and so many messages could NOT be a good thing.  Looking at the times the calls started around 5pm and the final call close to midnight.  We have NEVER, EVER missed an event and we are very proud of that fact, but I couldn’t help but wonder as I looked sickeningly at my phone if somehow we happened to miss someone’s event!

Reception still wasn’t good enough to listen to the voice messages so I had to drive another painful and long 15 minutes to wait to listen to what these messages could possibly be.

I called in and listen to the stream of all 7 voice messages fighting a sick feeling in my stomach and now starting to break into a cold sweat.  This sort of thing could completely ruin our good reputation if we DID happen to drop the ball somehow.

Upon listening to the first message I was instantly relieved that it was not something we did wrong.  However I did feel extreme empathy for the poor girl leaving the message on the phone.
It was a bride that we had the opportunity of meeting and providing our price to that decided to use another DJ.  That’s fine, we realise that we are not in everyone’s budget, nor are we the right fit for every couple.  However, this poor bride’s highest priority in choosing the right DJ for her night was by shopping for the cheapest one she could find.

The message she left went something like – “Hi, I’m not sure if you remember me, but we got a quote from you a few months ago for our wedding.  Ummm… just wondering if you would still be available tonight because the DJ we hired hasn’t shown up”.

Oh boy!  Now, this is far from the first time we have received these sort of calls, but this is the first time I wasn’t able to take the call to either be able to help or explain that we can’t.  I felt bad for her knowing that she kept leaving messages up until almost midnight, knowing that she must not have found anyone so I kept listening …

With each phone call the poor bride was getting more and more distressed.  To the point that she was actually getting aggressive with the messages she left.  One of the next messages was along the lines of saying that I was simply ignoring her because I had a bee in my bonnet because she didn’t choose us.  That of course, as she now knows is completely untrue.  No bride deserves to not have her entertainment turn up.

After all the calls, the final one at the end of the night was her really letting me have it.  I was (at that stage to her), the worst person in the world for not returning her calls.

The next morning I left it until late morning to ensure that she would be awake before calling.  I was a little nervous (even though I knew I did nothing wrong).  She answered and was very shy and polite.  She apologised even before I could explain my situation and that I couldn’t take her call.  I however, did explain that I had absolute zero phone reception so I was unable to answer.  She completely understood.  Since that day, I have taken her out for a coffee to ensure all was good.   She was understandably very disappointed with her night.  Most of her guests left very early with only a handful of her closest friends and family staying until the end.  The venue organised a small CD player and was limited to whatever CDs they had and what a few guests had in their car.  Such a terrible shame for such a special day.

As she herself said over coffee … “I now understand the true value of a DJ and wished I had not have put saving a few hundred dollars before reliability!”.

We use cookies to ensure that we give you the best experience on our website. If you continue to use this site we will assume that you are happy with it.Ok